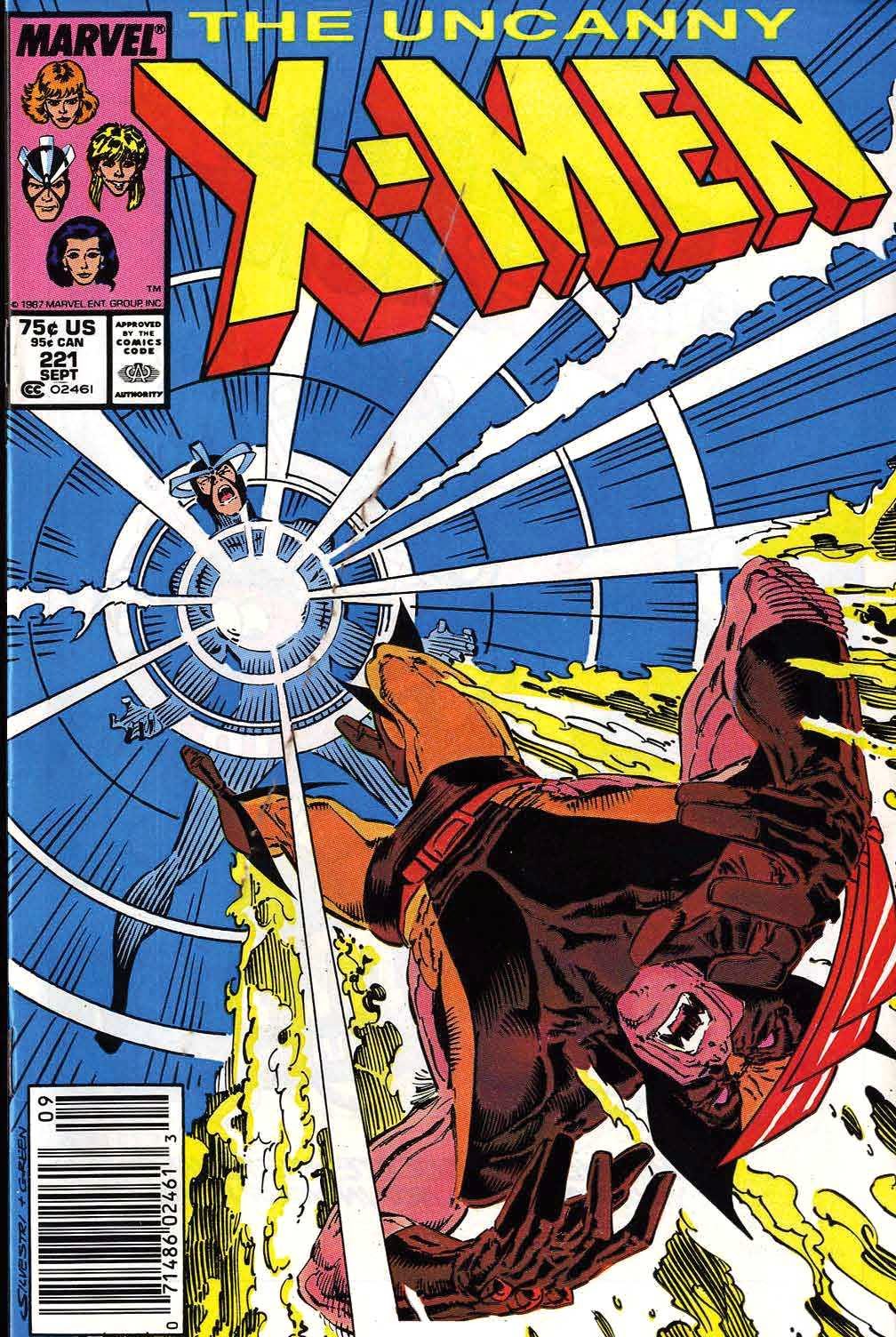 My, what you miss when you skip an issue. #219 wasn't in the collection, and now Havok is on the team and Polaris is leading the Marauders. Who knew?

He threatens the Marauders at length for two pages, Sabretooth's windpipe in his hand. Standing stock still for two straight panels with barely an expression makes him look more threatening than his teeth bared on that opening page. Unfortunate, indeed.

The hospital where Madelyne is holed up is surrounded by Marauders, but the X-Men are on the case as well. Rogue flies in unannounced and gives Sabretooth his comeuppance, but is easily thwarted by Scalphunter. In a (dare I say uncanny) use of their powers, Dazzler shoots Scalphunter in the back with her powers while Psylocke monitors her through telepathy. Neat stuff.

Vertigo catches the girls and Longshot by surprise, but Longshot hopes for the best and plummets off the rooftop cradling the ladies in his arms. Some neat play here.

Rogue escapes with Madelyn and they're entangled in a skyscraper by Polaris. Saved by Dazzler, she and Rogue come to terms with their outright hatred of each other, only to be thwarted in the last panel by Polaris spouting some rhetoric about how enemies are now the best of friends.

Wasn't she their friend, but now their enemy?! Ah, comics!

Posted by TheOracularBeard at 9:06 AM No comments: 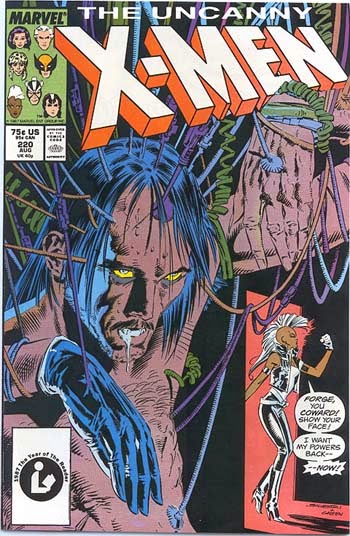 Great cover of 'ol Forge, reminds me a lot of seeing Wolverine plugged in as Weapon X. At least I think that's what it is, I'm still new to this. We've heard a lot about Forge up until this point, I'm glad we're finally getting around to seeing him.

But the opening scene makes me throw up in my mouth a little. Okay, so it's a little different in the outcome, but Storm portrayed as an eagle was only done a few months earlier in the Uncanny X-Men/New Mutants annual crossovers pitting them against Loki. The Forge-eagle transforming into a machine was a nice touch, but this had been done before.

Whatever Storm and Forge had shared in the past is portrayed quite nicely here. Storm makes her way through Forge's penthouse workshop, hoping to somehow restore her mutant abilities. As Storm is playing back the pain she suffered at his hands, Forge is also playing back scenes from their relationship as holograms. She's also randomly assaulted by his weapons as she infiltrates his pad.

She finds him, but also more than she bargained for...
Posted by TheOracularBeard at 7:02 PM No comments: 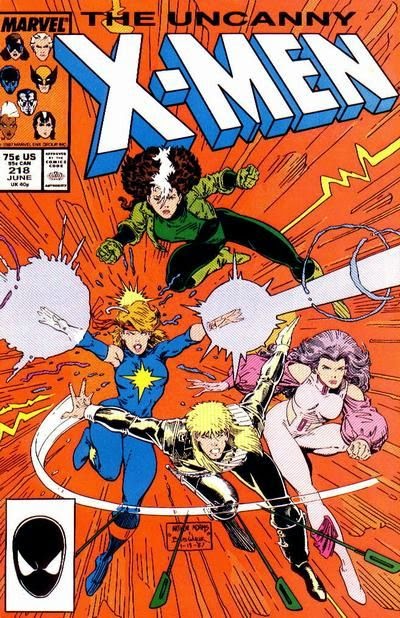 Chris starts us off half a world away with Havok and Polaris being run off the road by a VW bus.
Damn hippies.

Back to the story at hand, it seems as if The Jugs' (Juggernaut's, re: last review) decency knows no bounds. Thinking Dazzler's dead, he buries her in a cairn, so at least she's still able to breathe. Not only that, but slowly and surely she's able to hear a bit of what's happening on the outside. Bug, eagle, a babbling brook--there's enough sound to siphon to get her out of the grave she's in.

After some good saving, Dazzler admits to sucking by taking on so much by herself, but admits to being teammates and friends! Rogue is still a little standoffish, but together they are. They get word Juggernaut is tearing up a city and they join him to take him out.

They're STILL working on their own once they get there, however, and it isn't until Rogue takes out some train tracks by throwing Juggernaut that they realize they'll need to work together to save all the people on this train.

In the end, the authorities are happy to be helped with clean-up by the X-Men, but they're worried the X-Men aren't union.

Posted by TheOracularBeard at 8:09 PM No comments: 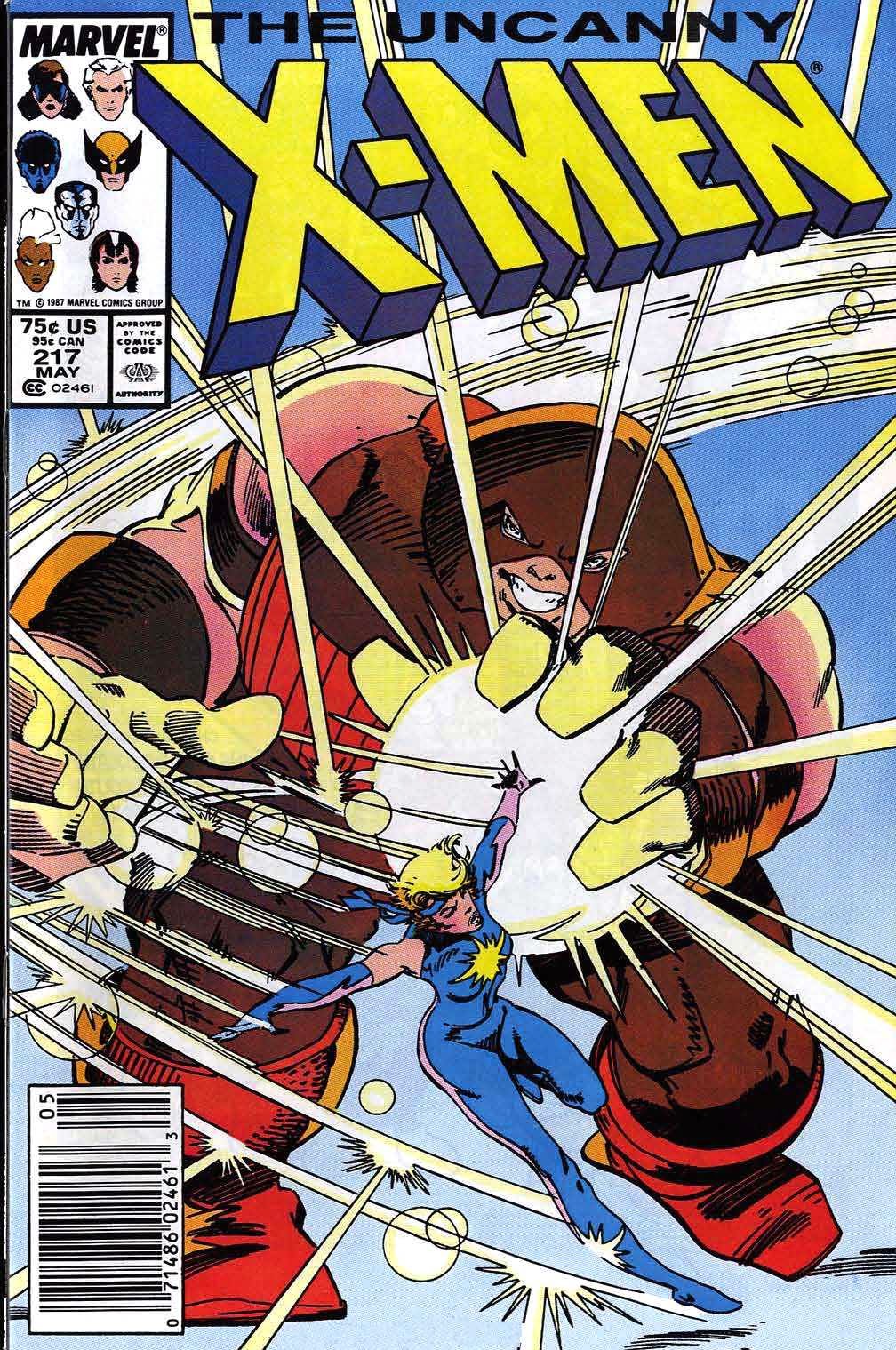 Golly, you can tell the X-Men are scrambling to form a team. Two are off on an undisclosed mission, three are in various states of disembodiment and the rest are at each others throats like little siblings. If it weren't for Juggernaut, we'd have one sorry issue.

Rogue, Dazzler and Psylocke are being trained by Banshee on Muir Isle, but everyone seems to forget that. The girls are slapping each other around and having a hard time working together. Banshee has them sit down for breakfast to let them know where they went wrong and Rogue clears the table with her attitude.

Dazzler gets into a tiff and heads over to town in a boat, dancing the night away. It's a jig, there are kilts and she's letting loose. Not too loose, because when she has her chance to plant one on a guy, she's off following some guy in a convertible.

Turns out it's the Juggernaut (affectionately known as The Jugs) that she's speeding after. Dazzler justifies her actions to show she can handle this without the team, because she never could to her father. This is all an extremely weird series of events because The Jugs isn't being a bad guy at the moment. He's actually gushing over Dazzler and her musical talent. He's enthralled. Who'd have thought she'd have two chances for smoochies tonight?

There's a bunch of fighting here where we get to see a vast array of Dazzler's powers. Her hypnotic light bubbles are pretty cool as is how she describes the way she's able to refresh her mutant power by draining the noise from around her. Too cool.


Posted by TheOracularBeard at 8:28 PM No comments: 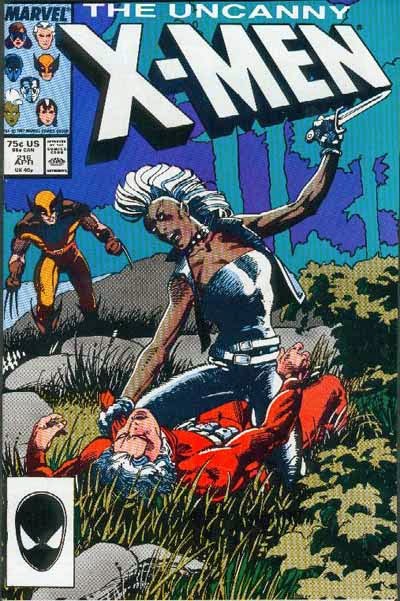 This issue wraps up last quite nicely. Wolverine goes a little wonky still, his powers aren't all that they used to be and he gets hit by a truck. He seems to still be following Jean's scent from last issue, but he didn't see that coming. Weird. Maybe it's the deaths they've racked up lately or fighting to the near-death with Lady Deathstrike? Then two innocents are killed under his watch? Wolverine just isn't on top of his game.

Storm and this coke-head are running for their lives of these mutants, and Storm is having second thoughts with having to kill them to survive. The coke-head does not approve, and tries her darndest to take out Storm and Super Sabre, only to be killed later by the remaining two mutants that were after her in the first place.


Not an overly satisfying conclusion. Mostly just Storm and Wolverine running around wondering if they're doing the right thing, and whether or not they trust themselves.
Posted by TheOracularBeard at 8:26 PM No comments: 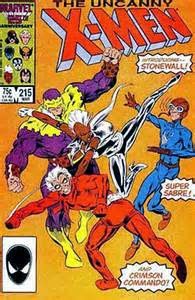 There we go again, judging a book by its cover. These three goobers look like they're asking for trouble to take on Storm (even without her powers) and the cover artist doesn't help much, either. That being said, the rest of the issue happening before we get to this scene perhaps made things a little more palpable.

We open with some nice paneling of a landing plane, quickly escalating matters into a crashing plane. Madelyn Pryor is the only one to make it out alive, the pursued and shot by the Marauders, then making it out alive again. Ridiculous, sometimes, how hardy these characters are. Not so much is Madelyn's inner monologue: some real poignant stuff here.

Cut to the X-mansion where Storm isn't trusting anyone and she splits up the group to keep the wounded safer than they would be at the mansion. She and Wolverine (though she doesn't trust him, either) head on a job to upstate New York. There they find Jean Grey's older sister's house in smoldering flames, but they also fine...Jean Grey?!

Wolvie flips out and socks Storm. She wakes up chained in a dungeon, like something out of a horror movie. Her captors are "crime fighters" who do their duty by chasing their victims across wooded areas for punishment. Not much like their cover-counterparts, these guys are surprisingly likable. Ex-WWII mutant vets, we no longer needed them after the war,so this is how they deal with it.

I know I've complained about the obsessive use of the word "caper" here and in The New Mutants, but I can't make heads or tails of Claremont. The Marauders continually use the word "skirts" to refer to women, but Super Sabre at least gets original using words like "dollface," "sweets," and "honey."
Posted by TheOracularBeard at 8:19 PM No comments: 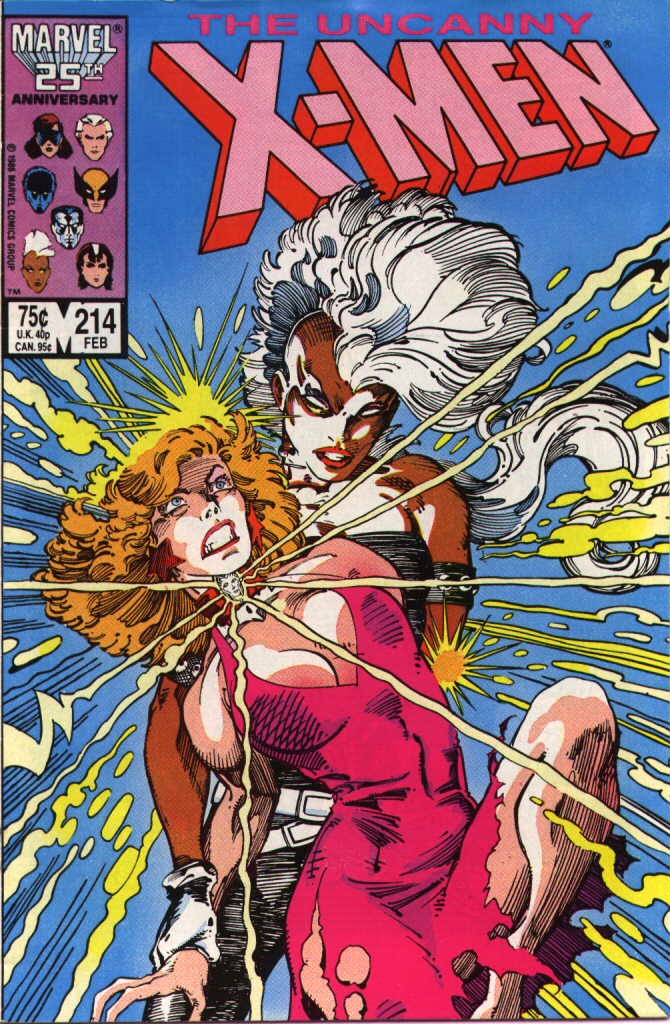 Dazzler is tired of hiding, and she's going to cut loose, even if that means letting others onto her status as a mutant. It's a neat feeling seeing Windsor-Smith's depiction of Dazzler's light shows with Claremont's description of being a musician. I've been on both sides of the stage, and it's magic every time. Much like Claremont telling it like it is.

The issue basically revolves around the entity of Malice who has hijacked Dazzler and then runs through the rest of the X-Men before she takes off to some other hapless soul.

Not a bad offering, but not great. Art really moved this one along.
Posted by TheOracularBeard at 8:07 PM No comments: