Something beautiful from Ugli Studios

It's always a pleasure when someone in comics seeks you out.  Someone, no matter how small-time they are, still big enough to believe in themselves and do the leg-work to get you their stuff.  I know the internet can be a huge, daunting place, but I'm sure it wasn't easy singling this guy out.

So, I'm sorry I've not gotten this out sooner, but writer/illustrator shouldn't have a problem getting fans to stop by his table at artist's alley, or wherever it is he happens to hold up cons or shops.  I read a review he posted by folks that have been doing this much longer than I have who panned the whole issue and I didn't want my review to be burdened in any way.

All in all, I'm still impressed he was emboldened enough to plop their review on his site.

Without further ado, here's the skinny:

Through the Eyes of Grizmelda 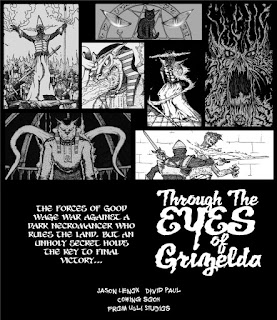 The issue opens with nice map of the land of Xendria and the age-old story of a land in turmoil.  We get a very brief history of the upheaval and some backdrop of the necromancer Amon Kadeshi.  There's also a little backstory of the necromancer's familiar Grizmelda and a mention of The Great Beast.  But we'll get to that.

What can I say, I'm not a cat guy.  Your cat people will love it, and I loved it because this is how I feel about all manner of cats: there's just something evil about them.  Cats, not cat people.  Though cat people (humanoids) would be pretty creepy, too. 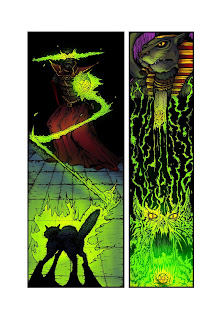 The art is great and panels really define the story here.  Very interesting to see the "bad guy" necromancer be your protagonist, but everyone has to fight for something, right?  Ends quite well, and creepy as hell, with that damn cat in his lap

Nice addition of some pin-ups at the end.

In only six short pages, Vermin really gets into a deep place in our psyche as to the differences between good and evil and our place in them.  Again, great art and panel work is amazing.  Page 3, Panel 2 is an amazing shot of flowers jutting up from a blasted corpse.  Feels like the 60s all over again.

Neat futuristic-looking pin-up by Joseph Freistuhler at the end really rounds things out.

All in all a great first issue one.  Would like to have not read it digitally, but I'm sure this guy has plenty this weekend at Setsucon, January 26-27 at the Penn Stater in State College, PA.
Posted by TheOracularBeard at 12:16 PM